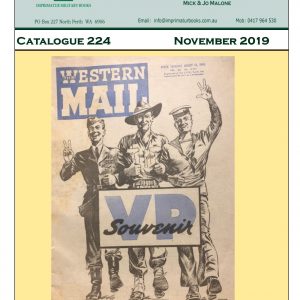 Welcome to Catalogue #224, November 2019. Today (31 Oct) we celebrate the wonderfully successful charge on Beersheba by the 4th Australian Light Horse Brigade in 1917. Known as ‘the last great cavalry charge’, they rode helter-skelter over 6 kms of open ground, jumped the leading Turkish trenches and stormed into Beersheba town (more a small camel station). They were off the horses (which had smelled the water), and got stuck into the Turks with hand-to-hand fighting. The were soon routed and fled north. It was the beginning of the end of the once mighty Ottoman Empire in that region and finished finally in 1918. Beersheba has generally been lost in the fog of time, relegated to insignificance by Gallipoli and the many battles of WW2, Korea and Vietnam. But we do those brave diggers a serious mis-service if we forget them. Their feat of arms was up there with one of the greatest in our short history. Harry Chauvel and John Monash are two extraordinary leaders for which we should always remain thankful. They both had a heavy influence on how the war turned out.

As we head in toward Remembrance Day on 11 Nov there will undoubtedly be many more stories told. This list is as usual dedicated to those deployed soldiers and those who are doing it tough.