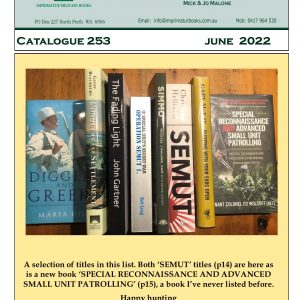 Welcome to Catalogue 253, June 2022. We are now in the Noongar season ‘Makuru’, which is the coldest and wettest season in the south west of WA. Good sleeping weather, not much good for walking. Doesn’t worry me too much as I prefer to hunker down at this time of year. The COVID situation prevails and I’m too old to be putting myself in harm’s way. Life should prove interesting with Albo now in charge. All we can hope for is that is his team is up to the mark. There will be a few sketchy numpties on his front bench needless to say. But I suppose that’s the case for most governments especially ones that have spent so long languishing in Opposition. The trainer wheels will have to come off quick smart. So, we wait with bated breath to see the outcomes of both the Government ministers (I hope he finds room for Jason Clare, one of the sharpest on the Labor side) and Opposition front bench led by Peter Dutton. I think Barnaby has had his day and now should just disappear onto the back bench.

This list is a big one covering all of my categories from American Civil War to, of course, WW2. Over 300 titles to get your teeth into. As usual, most of them are ‘one offs’ so you need to get on the blower asap on receipt. The appalling and highly embarrassing spectacle of the Ben Roberts-Smith drama drags on. Can’t see any good coming out of this saga. And while we’re crucifying one of our top soldiers, Russia and China are behaving like bullies in a school yard.

This list is again dedicated to veterans and serving soldiers and first-responders and their families who go above and beyond their call of duty on a daily basis. We keep you constantly in mind and hope that future governments will stop and think before committing troops to vague and futile wars. Having said that, we still need to be prepared to go to war at the drop of a hat. We don’t want to see 1939 repeated when we were totally unprepared for the chaos that followed. Best,