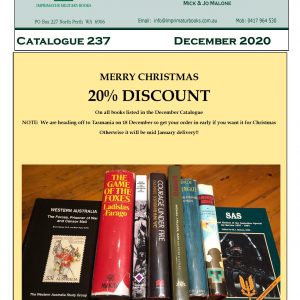 Welcome to our Christmas 20% off Catalogue 237. As we head into the festive season it is also the disconcerting season. The unprecedented attack on my Regiment SASR by the disgraceful media, politicians of all stripes and lastly by the military leadership who have turned their faces to the wall for over a decade. But it appears the Government have now taken note of the Yamashita Standard and have named all the commanders who were in charge over the period in question. It was ever thus that the diggers would be held accountable for misdeeds but now the blame is being sheeted home to the wider SASR community. The appalling thing about all this is that they’ve all been found guilty by the media before they’ve had a chance to clear their names. The business of killing ‘innocent people’ has been built into a war crime. I would suggest there were very few innocent people in those areas of operations as it is a well known fact that our enemies use women and children to plant IEDs and mines along access routes. In WW2 in Russia all the roads were mined primarily by village women but that’s OK—they were protecting their homeland? In Malaya Chin Peng did the same thing and in Vietnam the women and children we saw in the no-go areas carrying huge bags of rice were part of the supply column. Non combatants? Not on your life.

So here we are making a spectacle of our premier combat unit to what end? It’s one thing to have whistle blowers in the unit willing to dob their ‘mates’ in but another for the system to take so long to do anything about it. No doubt there are some soldiers who need to be removed but to tar the entire Regiment with the same brush is scandalous. And to disband a very good combat squadron before all the facts are known—who does that? The Canadians disbanded JTF1 after the incident in Somalia but 10 years later realized they couldn’t prosecute the government’s military agenda without them, and finally brought them back. Having lost all that expertise it will be awhile before the new JTF will be effective. And in the meantime Iran and China are laughing their heads off. As for the US—I won’t go there. Anyway, rant over.

There are some good books to be had in this list. Get in quickly (before 17 December) because we’re off to Tassie for Christmas. There won’t be a January list.

This list is dedicated to SASR and all who’ve served.