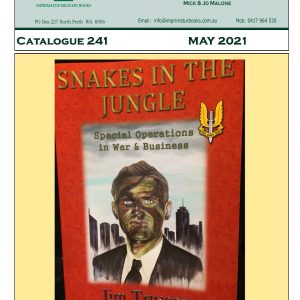 Welcome to Catalogue #241 of May 2021. We woke this morning to the tragic news of the untimely death of the formidable JIM TRUSCOTT, OAM, aged 64, adventurer, mountaineer, ex commander of 2 Cdo Company Melbourne, SAS major who made his mark in Timor when Tim McOwan took a squadron over there to vanquish the Indonesians and fellow travelers, loving husband of Collette and father of four.  Riding a bike in company with Min Moor and Harry Butler on the Burke & Wills track near Balranald in NSW, he bit the dust and was dead immediately. Hopefully it was one of those no-pain heart attacks. No doubt he will be sorely missed by all who were influenced by him and there are many! He was here only a week or two back to pick up a book and drink coffee. We always had stimulating conversations and his work with the Z Special Association has guaranteed their memory will survive. His knowledge of asymmetric warfare and associated pathways was far beyond that to which any of us could aspire. He was an engineer by trade who came to SASR as a young officer and was instantly drawn into the realm of guerrilla warfare. He was a lateral thinker which caused some push back among those who couldn’t keep up. He never took a backward step and was most forthright in his views as evidenced by his views in his book ‘SNAKES IN THE JUNGLE: SPECIAL OPERATIONS IN WAR AND BUSINESS’. (sold out). His recent critique of an error-laden book about AIB/SRD and Z Special in WW2 was particularly hard hitting in the Truscott style. Which goes to show how important it is to get your facts straight when you write an historical document. To Collette and family, my deepest condolences for the loss of your husband and father, a remarkable SAS/Cdo soldier, the likes of whom, we will not have the pleasure to meet again. VALE JIM RIP.

This is another of my ‘assorted’ lists with new titles mingling with many old and bold titles. Lacking space here to find room for any more so it is what it is. This list whilst dedicated to my friend Jim Truscott, and to the servicemen and women who have taken up the cudgel for this country over the years. And to those SASR members who are under the pump for perceived wrong doing in a theatre of war.