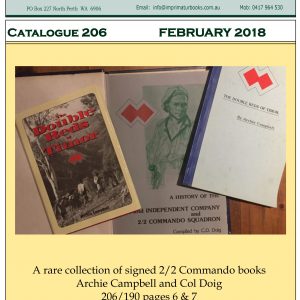 Bring it on 2018 – choice military books for you

Here we are in 2018 with the first list of the year, Catalogue #206. After a hectic December where we entertained son Toby and his family from the wilds of Canada and witnessed daughter Georgia’s memorable wedding to the redoubtable John Carter (JC). It all went swimmingly needless to say (with Jo and Georgia running things it was ever thus!) My beloved sister Helen and family also came over from Sydney. Plenty of grog was consumed and good cheer prevailed. I think I’ve just about recovered from the excesses. Glad to see the rear end of 2017 as it was a year in which I spent over 3 months in and out of hospital with a bug in my system. It now seems to have left me although my risk-averse microbiologist prefers me to stay on the antibiotics forever it seems. Ah well, it’s certainly better than the alternative. I must write and thank Hotel Hollywood for their excellent care. They look after us Veterans like royalty. (as they should I hear you mutter?) Yes, it’s a real bonus for those of who’ve put our lives on the line to know we will be looked after when it’s all over. But…there’s a huge worry in the Veteran community with the amount of young blokes from recent conflicts who are taking their own lives. Over 80 last year alone. What to do? Not much I’m afraid except trying to identify those in the system who may self harm. No one’s going to put their hand up whilst still serving and admit they have PTSD or other depressive illnesses because the system will throw them out. The unit I served with in particular were pretty fast on the draw so to speak. So no one sought counselling after Vietnam, Timor, Iraq and Afghanistan (may be a bit better now). By the time they pull the pin it’s generally too late. And once someone decides to end his life he will generally succeed. But we’re there for them and are there to help. As usual I dedicate this catalogue to those veterans (and serving soldiers) who may be struggling. It’s important to have veterans and friends networks to keep a weather eye open for each other. Oh by the way, there are some books listed herein for those who still consider a book a higher form of enlightenment. Via con Dios my friends.   Mick and Jo